BEST FOR: All levels of runners who want to use heart rate to guide their training. Whether you are coming off the couch, returning from an injury, finding your post-pregnancy groove, or simply wanting to take your fitness to the next level, this program is a healthy, sensible, and fun next step in your running journey.
PREREQS: No running experience, fitness level, or specific athletic background is necessary; this program meets you exactly where you are fitness-wise and helps you become a more fit, efficient runner.
NUMBER OF WEEKS: 8

In this Introduction to Running by Heart Rate, you’ll calculate your personal zones with one of two heart rate tests, and use that data to guide your training. You’ll test twice more during the eight-week program so you’ll be familiar with the process and be able to adjust your individual zones appropriately as you gain endurance and work up to a 75-minute run.

Running by heart rate requires patience and persistence. You will likely run slower than you have in years, and your post-run, “I’m-a-bad*ss” glow may not feel as intense as it usually does.

The thing to keep in mind is that post-run, bad*ss glow is likely from a Zone 3 effort (we explain that in the FAQs below), which leaves you prone to injury + stagnation. What’s more, that glow is temporary, and fleeting euphoric feelings are typically not worth the long-term drawbacks.

We—Coaches Jen + Liz— have trained athletes by heart rate for more than 20 years, and have seen huge gains when they lean in, slow down, and trust the process. This 8-week introduction is the perfect place to start. 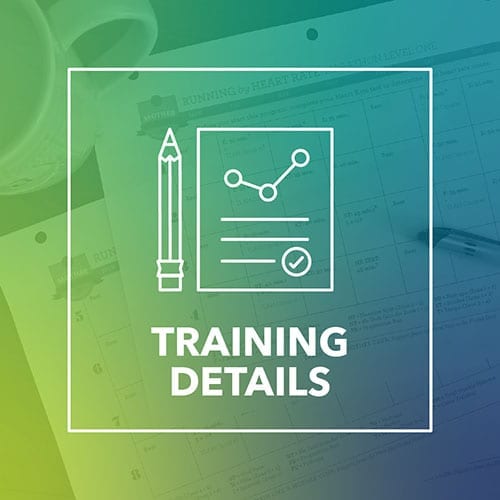 BIGGEST WEEK OF TRAINING: Tops out at four hours and five minutes of running over five days; in addition, there is one 50-minute cross-training session that week.

LONGEST RUN DISTANCE: By the end of the program, you will run for 75 minutes continuously. (If you are already able to meet this mark, we can easily help you extend your long runs.)

CROSS TRAINING + STRENGTH TRAINING INCLUDED? Yep. Each week has one or two cross-training days and two strength circuits that you can easily follow. Two strength routines include resistance bands.

FIRST AND PEAK WEEKS: (workouts are explained fully in the program) Coaches Jen and Liz are there to help you over speed bumps and answer your questions—and we promise, they’ll never throw a clipboard or blow a whistle in your face. Not only have the dynamic duo designed every facet of your program from your first step through your finish line, they’ve also written a weekly newsletter filled with advice and tips that corresponds to your training program.

What’s more, there are three ways you can connect with them:
—Ask the Coach column on Facebook: Coach Jen or Liz posts a weekly Ask the Coach column, where you can comment with anything that’s on your mind. (If you’re not a Facebooker, you can email us with your question.)

—Office Hours: If you’d like individual guidance, Coaches Jen + Liz have regular office hours so you can chat over your situation. In addition to Train Like a Mother Club, you’ll be invited to join a private Heart + Sole Club on Strava, where you can track your miles, and a private Heart + Sole Facebook page, where you’ll quickly find an army of (funny, empathetic, inspiring) #motherrunner teammates.* You’ll share training tips, stories of good runs and bad, cheer each other on, and push each other out the door. Momentum comes from teamwork, and these programs roll on some serious #motherrunner momentum. When does Heart + Sole: Introduction to Running by Heart Rate begin?

How will heart rate-based training help me become a better runner?

Building running-specific fitness is like building a pyramid. You have to start with a wide, solid base that can support the demands of the structure as it grows higher and higher. The stronger and wider the foundation, the better your performances will be at the peak. The majority of the runs in this program are in Zones 1-2, which helps you build a solid foundation of cardiovascular endurance and keep your risk of injury low.

Running by heart rate requires patience and persistence. You will likely run slower than you have in years, and your post-run, “I’m-a-bad*ss” glow may not feel as intense as it usually does. (But make no mistake, you are STILL a bad*ss!)

The thing to keep in mind is that that post-run, bad*ss glow is likely from a Zone 3 effort, which leaves you prone to injury + stagnation. What’s more, that glow is temporary, and fleeting euphoric feelings are typically not worth the long-term drawbacks.

Often athletes abandon training in lower heart rate zones out of frustration or boredom—or because they just can’t bear one.more.slow.run—and move on to the higher zones for one of two reasons:
A) They get to maintain a nice clip and satisfy their inner competitive beast
OR
B) They believe that training harder will yield faster and stronger results.

A is true—it does feel good to run fast, but it doesn’t do anything for building endurance or warding off injury. And B? Simply not true. We—Coaches Jen + Liz— have trained athletes by heart rate for more than 20 years, and have seen huge gains when they lean in, slow down, and trust the process.

Without a stable base? The pyramid is going to collapse into the sand—or in your case, result in injury, burn out, sickness, or a performance plateau. Thanks, but no. The most efficient way to build your own, never-gonna-break-down pyramid is to train in your own heart rate zones.

I get injured easily. How does Heart + Sole: Running by Heart Rate help me stay healthy?

Because using your heart rate—not your GPS or best friend—as your pace guide allows you to zero in on Zone 2. This Zone, which encourages, slower, easy running, improve endurance and aerobic capacity while allowing all of your body, from your strong, powerful glutes to the tiny tendons in your feet, to adjust to the high-impact demands of running.

When you exercise in Zone 2, you improve your heart’s ability to pump blood and your muscles’ ability to utilize oxygen—two of the foundational bricks of your #BAMR pyramid. Training in Zone 2, a physiological sweet spot, teaches the body to become more efficient at fueling muscles and metabolizing fat as a primary source of fuel. Slow twitch muscle fibers become stronger and better at using oxygen to produce energy.

It’s not only about oxygen transport, though. Your ligaments, tendons and other connective tissue adapt more slowly to the high impact demands than your muscles do. Hanging in Zone 2 gives them time and distance to adjust and prepares them for the higher intensities of the upper zones.

How do I know if this is the right program for me?

This program is suitable for any runner–beginning, advanced, marathoner, not-yet-5K’er, postpartum, in a training lull— who wants to give running by heart rate a try.

There are no physical prereqs, other than being injury-free. The only other prereq? You need to own a heart rate monitor, and you need to wear it all the time while training.

What heart rate monitor do you recommend?

It depends on your budget, your preference for features, and your feelings towards tech. (One great place to do a deep dive into heart rate monitors is D.C. Rainmaker.)

The most basic or sophisticated model will be suitable for this program; we recommend using a device from either Garmin or Polar. As you look through the options, know you need a monitor that, at a minimum, displays elapsed time and heart rate. Features like cadence, pace, vertical oscillation, and stride length are interesting to observe and track but are definitely not necessary.

Wrist-based monitoring, including Apple watches, has definitely improved over the years, but it’s still not as accurate as a chest strap, so go for the latter if you want the most consistent data.

Do I need other equipment for this program?

No. Running by Heart Rate: An Introduction is simply a training program to gain or maintain fitness and try running by heart rate.

What if I realize this isn’t the right program for me?

We definitely want this to work into your life and your running lifestyle. You can email us within 2 weeks of starting the program and we will set you up with another plan or a partial credit for an upcoming program. We will not be able to issue a straight-up refund.

With a smart training plan, doable strength training, and advice on foam rolling and other self-care, we’re going to do our best to keep you injury-free. That said, if you have an injury or illness that totally slays your training, let us know within two weeks. We’ll work with you to get you a partial credit for an upcoming program.

7 reviews for HEART + SOLE: AN INTRODUCTION